Songs are the golden eggs in music catalogues, but who is looking after the goose?

It will not have escaped your attention that music catalogues are changing hands for serious sums of money. The race to acquire the songwriters’ share is on, and it is speeding up. However, while that race is a sprint, what happens after that is a marathon. For the acquirers: Hipgnosis and its cohort of competitors, publishing majors like UMPG or indies like BMG, the return on investment is very much a longer term game. In this game some of the rules are known: the so-called uncorrelated revenues from public performance, the scale of streaming etc. and some are not: the lucky strike of a TikTok viral hit or a major synch or sample license for example. Other rules are being made up as the game develops, and these are much more intriguing. For example, why do some catalogues seem to effortlessly connect with the millennial masses (Fleetwood Mac, Queen) while for others that’s a nut still to be cracked. Can these new song owners make a song (and therefore the artist) more culturally relevant?

Of course, part of the game is to acquire songs and artists that will remain culturally relevant. Bob Dylan, Fleetwood Mac et. al. will always be so to some extent. But, a steady hum of cultural relevance will not be enough to make these catalogues truly profitable. The new owners need more than that - can these catalogues be nudged along, so that they culturally ‘pop’ over and over again?

Consider Queen for example. There was a long period (most of the 90s and a fair chunk of the 2000’s) when nobody really cared much for Queen’s music. It took a steady succession of re-releases (with a change of label ownership too), massive legacy tours, documentaries, a blockbuster movie, major synchs and social media phenomena to elevate Queen from 200th to 27th most streamed band in the world i.e. this was not uncorrelated. Ask Brian May and Roger Taylor. While they must be amazed at how well they have navigated the landscape, approaching 30 years after Freddie’s death, at the same time they also will know the effort that has gone into it all.**

The vision for song management

Those acquirers that are laying out tens or hundreds of millions of dollars per deal, are looking for that kind of success. But do they plan to commission artist biographies? Can they make blockbuster movies? Can they Encourage legacy tours or even new recordings by the artists they are the new custodians of? Do they have the influence, resources and skills to not just to pull levers we call ‘marketing’, but to construct entire new marketing machinery? Marketing is absolutely at the core of future success for song catalogues, even if lucky random breaks will continue to happen thanks to social media phenomena. But to shift the needle culturally on a catalogue requires a big, sustained and coordinated effort. And that is where it gets tough.

It is possible though. During his second stint as INXS manager from 2008, Chris Murphy (who passed away last week) took back the band’s ownership of their songs and signed them to his Petrol Records label. Over the following decade came wave after wave of projects: album reissues and remixes, the ‘Original Sin’ covers album, the highly successful (two-part) documentary ‘Never Tear Us Apart’, and then considerable success on streaming platforms, where the band seemed to achieve that all-important crossover to younger audiences. More recently there has been the Michael Hutchence film ‘Mystify’, and a planned Broadway show around INXS music. Key to this was Murphy’s ownership of the masters - and his vision as Creative Director - with all these projects a considerable investment but, subsequently generating more sales and streams that contributed directly to the band’s finances. Therein lies the challenge for new song catalogue owners. Since they own a much smaller slice of rights than labels (and indeed usually only about half of the publishing rights) any investment in marketing projects on the scale Murphy undertook with INXS is likely to be difficult if not impossible.

Once the songwriter has cashed out what will their motivation be to participate in these projects? Even when artists owned the rights themselves they didn’t contribute too much to the marketing effort. In most cases, they may carry on making new music and if possible, touring this new stuff along with the old songs. Many artists don’t like looking back, however. They might give permissions on synchs (though just as often exercised their choice to say no). Meanwhile, their publishers didn’t gather a reputation for aggressive marketing either. And in those cases where new music was no longer being made (as with Queen and INXS by way of losing their frontmen) labels sometimes simply neglected the catalogues too. While the deals to acquire catalogues cannot make it conditional for the seller/songwriter to contribute to future marketing projects, one of the key elements should be to enhance and protect their legacy - something Hipgnosis has been keen to emphasize in its deals. It all has to be done with taste.

For catalogues of a smaller scale, or those in which rights are fragmented, how can game-changing marketing activities and development projects be coordinated? Who encourages who to re-create and re-invest in those songs? This is the ultimate challenge for ‘song management’ i.e. the careful, coordinated cultural marketing effort behind the golden eggs that are top songs.

In many ways it bodes well for catalogue: less neglect, continual re-introduction of songs to new generations, re-mastering & mixing of albums that genuinely improve with care (or were never right the first time, for example, Billy Joel’s first two albums were recorded at entirely the wrong speed) and perhaps more creative interpretations (Wham’s Last Christmas has benefited from numerous covers even if many of them are dodgy).

Plenty of legacy artists have asked the question “why aren’t we bigger on streaming?”, or perhaps better “how can we become bigger on streaming?” The answer to the question is by necessity the answer to a different question. Since we now know that streaming services amplify culture rather than shape it, the real question is “how can we be more culturally relevant?” With song management this question becomes the ultimate marketing objective. The prize is big - a return on investment and proof of the viability of the catalogue acquisition business model over the long term.

The best song managers turn these searching questions into objectives. For example, are those songs that stream best the same as those songs that were the biggest hits at the time (chart, radio play)? If not, why not? What can be done to make those deeper hits resurface again on streaming? A look at Blondie for example, might suggest that tracks such as Rapture, Atomic and The Tide Is High have much more streaming life in them. Additionally, the millennial success of One Way Or Another (thanks in part to One Direction) suggests there are more gemstones in the vaults for Blondie.

In my experience, the music sector is pretty inward looking and non-strategic, and so the adoption of an outward-facing, strategic model seems like a good idea. As such, I’ve adapted the Strategyzer Business Model Canvas (under Creative Commons usage rules). This maps the coordinated set of goals, assets and activities required to generate the significant growth in value of a catalogue, with the right marketing power behind it. Since the ‘below the line’ activities on the original Strategyzer canvas are ‘costs & revenues’ not super-relevant here, I have swapped these with the specific brief of the song manager - both in terms of coordinating objectives and strategy and subsequent marketing activities. 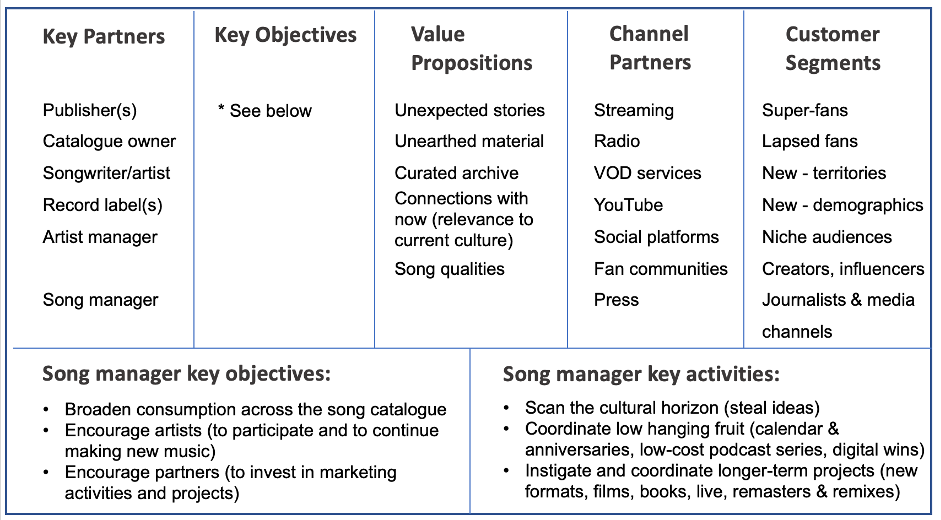 * Some Key Objectives include:

We are about to enter a golden period of immersive, reflective content that celebrates and re-imagines a universal part of culture - songs. I’ve never heard the Bee Gees catalogue (beyond the obvious) but will spend time with it following the highly enjoyable film ‘How Can You Mend A Broken Heart’, released last month (made by blockbuster filmmaker Frank Marshall). It’s the perfect example of exploring a major artist’s backstory i.e. revealing them to be much more than their disco legacy suggests and telling the story of their roller-coaster ride of a career. In the end the big reveal by Barry Gibb is that their ultimate legacy is the songwriting (not performance). If there is an invitation to immerse yourself in an unfamiliar catalogue from a legend, then that is it. And note by the way here - timing. Off the back of that film comes Gibb’s new album ‘Greenfields’ - a meticulous reworking of some of the Bee Gees classic catalogue as country songs (featuring high profile guests such as Keith Urban, Dolly Parton and Miranda Lambert).

So, who’s responsible for bringing The Bee Gees back into the culture in such a powerful and coordinated way? You’ll have to excuse the pun, but someone has been working hard at growing the Bee Gees’ beard (i.e. the cultural opposite of ‘jumping the shark’).

The answer is no one but many people at the same time. It’s the role of song managers, catalogue marketers, legacy artist managers, their estates (if gone), and the creators themselves (if still with us) to work at it, creating a sort of rolling bandwagon of projects, related activities and woven-together threads. If each entity in this value chain is scanning the cultural horizon (i.e. stealing ideas from other campaigns), keeping an eye on the calendar and communicating to one another, then that bandwagon can really roll.

** my second favourite Queen songwriter John Deacon is less bothered with it all.

His music discovery site for catalogue artists can be found at https://www.songsommelier.com/artists

Everyone hurts – the problem with ‘fixing’ streaming

Creators are focusing on the wrong metrics. Here is why:

The live versus streaming demographic paradox

by Hanna Kahlert
5 Jan 2021
As we begin 2021 with a vaccine on the near horizon, live venue businesses are holding on with whitening knuckles through the intermediate stricter lockdowns. However, the world has changed much in the...

What measures an artist's success in today's music industry?

by Keith Jopling
23 Dec 2020
It’s that time of year again for lists. Endless top albums and song rankings that can be a bonus for a music artist to be included on. A placement on an influential list (which ones those are is more...

Are rights holders missing the point with Twitch?

by Mark Mulligan
13 Nov 2020
Twitch has apologised to its users for the growing volume of rights holder takedown notices for music used in Twitch videos . Twitch is in an awkward transitionary phase with music rights holders, not...
No thanks